On this page are some MIP MOC MIB, and below those are Rare & Unique Ponies.

This vintage 80s MLP game is ultra RARE and FACTORY SEALED mint in box and comes with rare original 80s advertisement for it.

Vintage mint in package / mint on card and from overseas, her package is in excellent condition. I believe the languages on it are Dutch and French. She's not only a rare mint in package My Little Pony Sunshine Pony, but she's also one of the very collectible foreign versions. These often go for 3-400 in auctions, but I don't have online accounts and don't ship. So, you get a deal. ^_~

The vintage 80s original MLP movie came in a collectible set with pink vhs tape and a new version of Firefly with dark blue hair and a new pose. The package is in excellent condition. The last one I saw mint in package sold for over $400. I've only seen two mint in package for sale in probably twenty years. 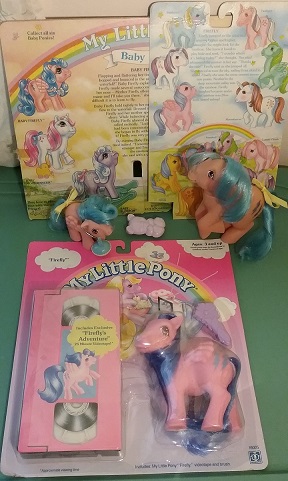 These are two versions of the 10th Anniversary MLP Birthday Pony along with an original ad that includes her. Though advertised with yellow, she was never released with yellow on her, and she was released with differing colors of tinsel. Both are still a nice clean white.

The later version (below) has just medium blue tinsel in her hair. $10 by herself.

According to mylittlewiki.org, the prototypes of this Pony had magenta and blue tinsel (actual prototypes also had yellow in the symbols), so I believe the version I have with magenta and dark blue tinsel was the first run/release and later changed to plain medium-blue, the other one I have. [Of course, someone changed the information since the last time I was there. 9_9 Now, it's almost somewhat random and not as detailed in the description, and I remember better photos.]

Many fans call her "Charlie". She was exclusive to Chuck E. Cheese restaurant customers. This one is in excellent to like new condition with beautiful hair.

Baby Christmas Pony was only available through mailorder from Rice Krispies cereal and is one of only three Christmas Ponies ever made in the original 80s G1 MLP line, as well as the only baby Christmas pony. This one has beautiful hair and is still nicely white. The red bow on her tail is a Christmas decoration - she didn't come with it. She has the same symbol as the 3rd Christmas Pony called Stockings (extremely hard to find), so most fans call her Baby Stockings. ~ I have a one-owner, only watched a few times, fun movie vhs "A Very Minty Christmas", which you can have with her for no additional cost. 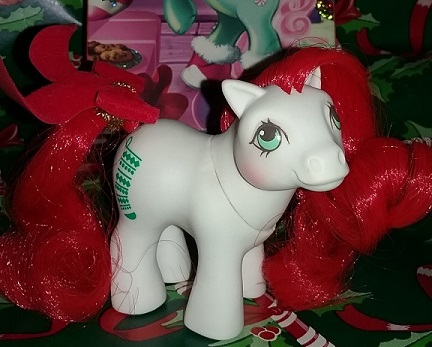 I also have a stray Flutter Pony wing. Free with purchase of other items, or $5 by itself.